MEN’S GET INTO GOLF PROGRAMME.

Ever wanted to be able to play golf?  We would love to help you at Cushendall Golf Club and you’ll be very welcome.

For further information contact Jim or Joe by Friday 3rd May 2019. 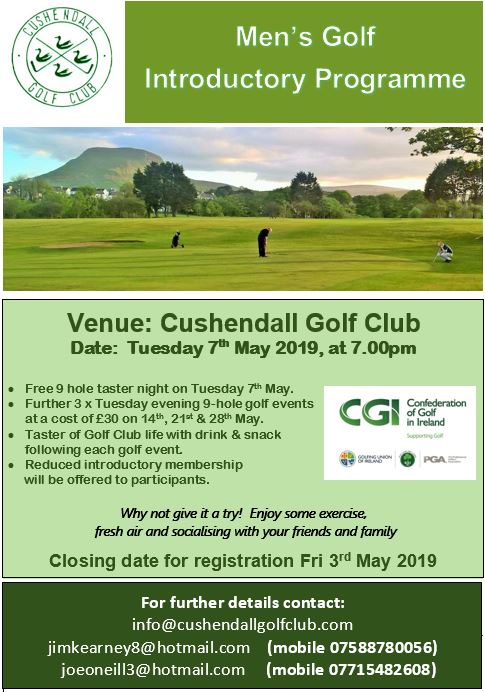 I Am Maura at Cushendall Golf Club

Following on from a sell-out production That Scottish Play!, Commedia of Errors Theatre Company bring this brand-new show to the stage.

In this one woman play, audiences will encounter over a dozen characters, each defined by physicality and vocal nuances. Using direct address,

storytelling and truthful dialogue, I Am Maura places the audience at the centre of this pivotal week in Maura’s life.

The production is a multi-role, physical comedy and features physical characterisation, mime and singing. The show embraces the pop-culture of

Martine McCutcheon, Destiny’s Child and the life-changing invention of social media. It will appeal and inspire, whilst carefully exploring how we handle the education of

young people by putting them in the care of institutions that would be better suited to the 19th century.

The show will be performed  at Cushendall Golf Club on Friday 10 May at 8pm. Adm £9